The time team on both shows are immensely committed to preserving history. While Legends have done that using different plotlines each season, our friends on Timeless have been chasing an evil organization, Rittenhouse, that is bent on turning history in its favour. That summarizes the plan of every Legends’ big bad.

The newest episode of Timeless(S02E06) titled “The King of Delta Blues” definitely made Legends fans nostalgic(sort of.) Rittenhouse travelled back in time to San Antonio, 1936, to stop Robert Johnson and Don Law from recording an album and the team wants to make sure the album is made. Robert Johnson is the King of Delta Blues and Father of Rock ‘n’ Roll. Not recording that album means there is no modern blues music, “no rock n roll, none of your Elvis.”
The latter, Elvis Presley, on the other hand, is the subject of rescue in Legends episode(S03E14) titled “Amazing Grace.” In the Legends episode, the team had to made sure Elvis Presley record an album too.

As earlier stated, Robert Johnson not recording that album means the numerous things inspired by his music wouldn’t exist:

“It wouldn’t just be Rittenhouse
killing rock ‘n’ roll, at its source, it would be them killing the cultural revolution of the 1960s, the civil rights movement, the… The fall of Nixon, the end of the Vietnam War, the counterculture as we know it. ” _ Lucy.

Elvis not recording his album, on the other hand means the present will also be pretty messed up because his songs inspired “protests, revolutions…” and Nate losing his virginity.

Perhaps the most important piece of element in comparing both episodes is the guitar (and the ‘devil’).

According to Timeless, ( yes, I’m not weighing in actual history) Robert Johnson sold his soul to the devil which is why he could play so good. On Legends, the episode opens with Elvis walking into a music store wanting to buy his first guitar. His eye caught a fancy guitar hanging on the wall. The store owner refuses to sell that particular guitar to him and tried his best to dissuade Elvis from buying it because it belonged to “one Robert Johnson.”
To which Elvis replied, “The Robert Johnson?”

Robert’s music probably inspired Elvis (as hinted by Connor on Timeless) which is why he jumped at the idea of owning his idol’s guitar. The store owner frets (pun intended) and goes on about how the guitar is “cursed” because, remember, RJ sold his soul to the devil.

On Timeless, throughout the episode, RJ talks about how he is “cursed.” But on Legends, to suit the plot, the guitar was possessed by a Death Totem attached to it. For non-Legends watchers, here’s what a Death Totem is:

Timeless’ The King Of Delta Blue could easily play as a prequel to LOT’s Amazing Grace just like most episodes of the former’s sophomore season.
Both time teams have saved history, interacted with actual legends and brought some to the present. Running different travel ships and slightly different time rules sets the disparity. But it doesn’t matter because Timeless and LOT are among the best SciFi shows in the world atm.

And after LOT’s rendezvous with young President Obama, I can’t wait for TeamTimeless to grope young Donald Trump back to the future. 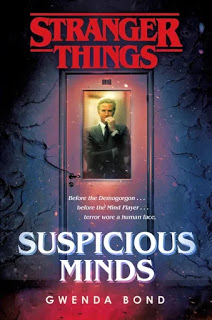 Something to soothe your thirst for the Hawkins story.
Books, TV
29 Apr 18 Okiki Adeduyite

Oh please don't look at me like that, Alex. That is a perfect headline.

Ted Lasso is a giant bundle of infectious joy.